The solo traveler’s one massive struggle; taking pictures of themselves! Without a travel buddy doing it for you, you’re probably going to be left with just selfie, or of places without you in it. 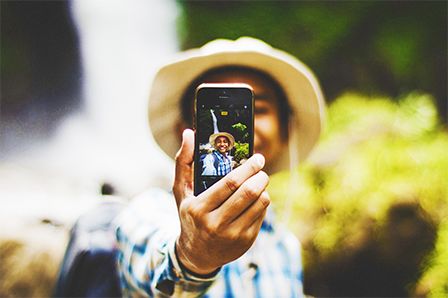 It may seem rather impersonal for you, especially if you want the picture to be “yours” alone. How do some travel photographers and travel bloggers get their pics when they’re traveling solo?

When selfie is all you can do the majority of the time during you solo travel, learning to know the angles that flatters you the most—or any angles of yourself that you like—is important! In other words, adapt!

Shots of yourself that doesn’t have to show just your face in the most traditional selfie format often works well for your travel photos.

People’s faces have the effect of taking the focus out of a scenery to the face. While the focus of a photo would inevitably be you, there is the quality of being “susceptible” in the shot where you don’t have your full attention to the camera.

Make use of self timer

This may be the obvious option as you’re probably already doing it outside of your travel. So duh. But bottomline is, they work.

Marvelously, once you’ve around to making the feature work for you. It is somewhat tricky. And you the only way for you to get better is to practice. How much of your body parts that you want shown in your shot?

Where should you place your device? Navigate your way around your environment you’re wanted to take photos in.

Most modern phones and some digital cameras have burst modes that can take multiple frames in a stand of one second or more. How many frames burst modes could take depends on the device itself.

Continuous shooting mode is a good option for action-shots.

Ask other people to do it for you

Just ask! The worst thing they can tell you is no. However, remember that everyone’s photography skills vary.

Make sure to be careful when handing your device to a stranger. Research your destination when you plan to solo travel. Some places are merely not safe for you to hand over your devices to someone else.

Many solo travellers favourite travel buddy when going solo. Make sure to use a high quality tripod as it may not be designed well or not stable enough.

Remember, tripods hold your camera. You’ll be losing that expensive camera if anything happens to the tripod. Getting blown by the wind, falling because of unsteady legs, and many other things can happen when using a tripod on various environment.

Having tripod is going to up your travel photography a notch.

Get a remote controller

Remote controller is super handy and it can be used with whatever tools you’re using with your camera devices. It’s a good option when you don’t like having to rush in front of your camera when you’re using the self timer feature.

Depending on your phone, you can actually use it as a remote control. However of course, this won’t work if your phone is the only tool you have. Having a remote control is going to make taking pictures so much easier for you.